A Day at the 2021 Smokey Point Desperados Standoff 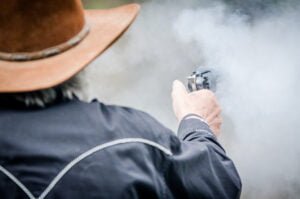 September 10th, was a great day for a book signing at the Smokey Point Desperados 2021 Standoff.

Nestled amongst the evergreens in NW Washington State and protected behind towering dirt berms the Smokey Point Desperados Standoff took place with attendees dressed in period western wear and using period firearms. Competitors must dress the part from head to foot in 19th century Old West attire. Dressing for the part in an old west-style costume is one of the main attractions of this sport. It allows the inner Cowgirl & Cowboy to break free and relive the Wild West of years gone by. 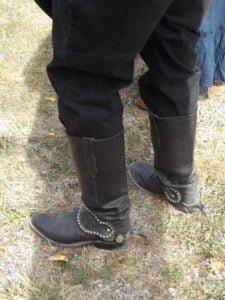 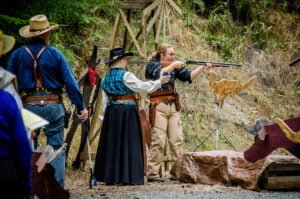 Think of the good and the bad (I’ll leave out the ugly). Wyatt Earp, Doc Holliday, the nefarious James Younger & Bob Dalton, and mountain men of lore. Contestants are required to have an alias or character name. My name is”Sugar McBride”. 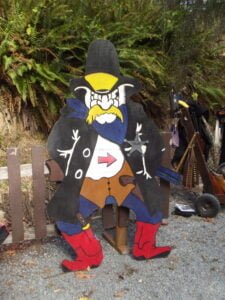 This fast paced event is meant to preserve and promote the sport of Cowboy Action Shooting by reliving the old west in a safe, friendly, and family-oriented environment.  I found the action as real as it gets where guns take center stage. Safety is always of the utmost concern and watching from a comfortable distance lent me an eye on the seriousness of the competition. All of the attendees came wellarmed to enjoy the competition. 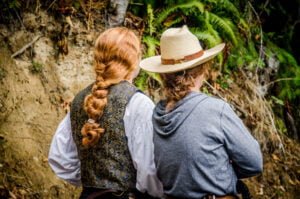 Cowboy Action Shooting is a multi-faceted shooting sport in which contestants compete with firearms such as single-action revolvers, pistol caliber lever action rifles, and old-time shotguns.  It is a timed sport in which shooters compete for prestige on a course of different shooting stages (SASS). Each stage was settled within various numbered berms to protect the other stages & competitors. Wearing eye and ear protectors was a must during this well-orchestrated event attended by participants from all over Washington State and beyond. One non-participant was accompanied by his service dog who was provided with her own special canine ear protection and remained calm throughout the event. 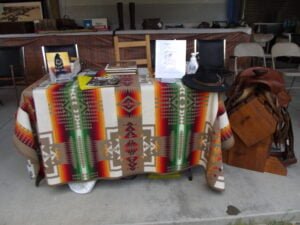 My table was draped with my prized Pendelton blanket purchased in 2018 during the Women Writing the West Conference in Walla Walla that afforded its members a side trip to the Pendelton Woolen Mills. A must-stop for anyone visiting Northeast Oregon. The saddle belongs to my dear friend and neighbor, Tim Zentler who is also a member of the Smokey Point Desperados. 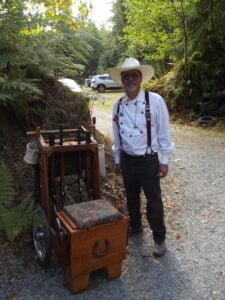 I found it interesting how the contestants moved their firearms and ammo around the shooting range. Many were using a wheeled “gun cart” (seen in the photo right) that also functions as a carry-all utility cart. Some were specially made and monogrammed like the one to the right while others used converted baby strollers to meet their needs. Either way, they were clever and unique.

A BIG thank you to Tim Zentler (pictured right) for arranging my time at the event. And, thank you to the event organizers for allowing me to be a part of this day.