“The Notorious Life of Ned Buntline, A Tale of Murder, Betrayal, and the Creation of Buffalo Bill,” by Julia Bricklin

The Notorious Life of Ned Buntline, A Tale of Murder, Betrayal, and the Creation of Buffalo Bill, by Award Winning Author and Historian, Julia Bricklin, TwoDot Publishing.

Ned Buntline, notorious or nefarious? A man who once said, “It doesn’t require a large amount of intellect to write a successful novel.”

Ned Buntline, a man of many contradictions, was born Edward Zane Carroll Judson in 1821. A child eager for his father’s direction and approval. Receiving little to none of either, more than likely, set into motion a life full of trials and error. In his pursuit of notoriety, Ned’s search led him in many tumultuous directions.

Julia Bricklin, a member of Western Writers of America and Women Writing the West, once again has proven herself as an outstanding researcher and author for the lesser-known characters in American history. Ned Buntline is one such person who, on his one and only trip West in 1869, discovered the then twenty-three-year-old William Frederick Cody, soon to be Buffalo Bill, who had already established himself on the Western Frontier. In 1872, Ned wrote and co-starred in New York City with Cody in the play, The Scouts of the Prairie, and Red Deviltry As It Is.

When asked, Ms. Bricklin states, “This is a story I thought needed to be told.”  Thankfully, she did. In this fascinating work of non-fiction, Bricklin’s eye for detail and truth is evident in her thorough account of Ned Buntline’s life. While she draws you into his captivating story, the reader may need a scorecard to keep up with Ned’s chaotic existence.

By the time Judson was twenty-six years old, he was known to many on the East Coast as a famous author and adventurer. Unfortunately, he was also a provocateur. Famous for the latter as the instigator of the Astor Place Riots of 1849 in New York City, a dark moment in his life, where he showed little remorse. Many innocent bystanders and rioters alike were killed, leading Ned to stand trial for murder. Sentenced, he served time in the Blackwell’s Island prison. 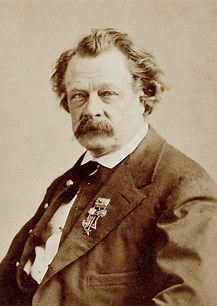 This didn’t stop Judson’s search for infamy. In his sixty-five years, he was, to mention a few, a soldier, an alcoholic, polygamist, want-a-be politician, instigator of riots, and a murderer. Having served in several military conflicts, he used his experiences, expounding on the exploits of his service throughout his writing. All the while, Judson woo many a young woman, at least eight that he married, even some at the same time. A known polygamist and adulterer, he left behind broken hearts, penniless wives, mothers, and numerous children.

Judson’s life reads like one of the ‘Dime’ novels he so famously coined. In the mid to late 1800s the notorious Ned Buntline published over four-hundred Western genre novels, creating fictional and real legends that American, at the time, couldn’t get enough of.

Intrigued? Julia Bricklin’s book is one to place on your must-read list.