Mark C. Jackson has done it again with his third book, Blue Rivers of Heaven, the story of Zebadiah Creed’s continuing saga of seeking revenge for his brother’s murder. For those who have not read Jackson’s first two books in this series, An Eye For An Eye and The Great Texas Dance, this story takes you and Zebadiah on his journey down the winding lower Missouri and Mississippi Rivers.

For the frontiersman known to some as the “Scalper,” time is of the essence as he struggles to survive and race a “cold-blooded killer” back to the woman he loves and left behind.

Framed and sentenced for a murder he did not commit, Blue Rivers of Heaven takes the reader through the gritty darkness and filth of the Orleans Parish Prison in 1836. Zebadiah’s stint as a member of its chain gang building a road through the dangerous murky swamps and the seedier side of New Orleans during the early 1800s is seamlessly detailed.

Set free, then held captive by a group of conspirators whose ulterior motive is to keep slavery alive in the south, they attempt to pressure Creed into assassinating General Sam Houston, who they feel will impede their goal. But Zebadiah has other plans I won’t give away.

Back in New Orleans, he meets up with characters from Jackson’s previous two books, completing this tale. You’ll want to read all three to follow Creed’s action-packed journey.

In this page-turner, Jackson’s attention to detail with place and time can’t help but pull the reader in, placing you right into Zebadiah’s struggle for revenge and survival. I hope Jackson has plans to continue Creed’s travels with book four.

Blue Rivers of Heaven and Jackson’s other books are available on Amazon and through your local bookstore. 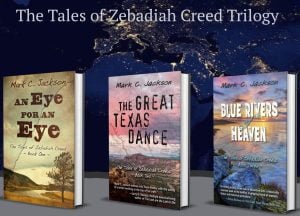